Exploring our range of motion

An ever-present shared interest that Dina and I have both explored together since we first met has been acroyoga. Acroyoga, partner acrobatics, or simply acro, has opened many experiential doors both inwards and outwards for the both of us. The Seattle community is unbelievably fortunate to have been the longtime home of a world-renowned teacher offering multiple intermediate to advanced level series on an ongoing basis. As a natural byproduct, several teachers for the introductory realm helped to lower the barrier to entry even further by offering great accessibility to the basics. 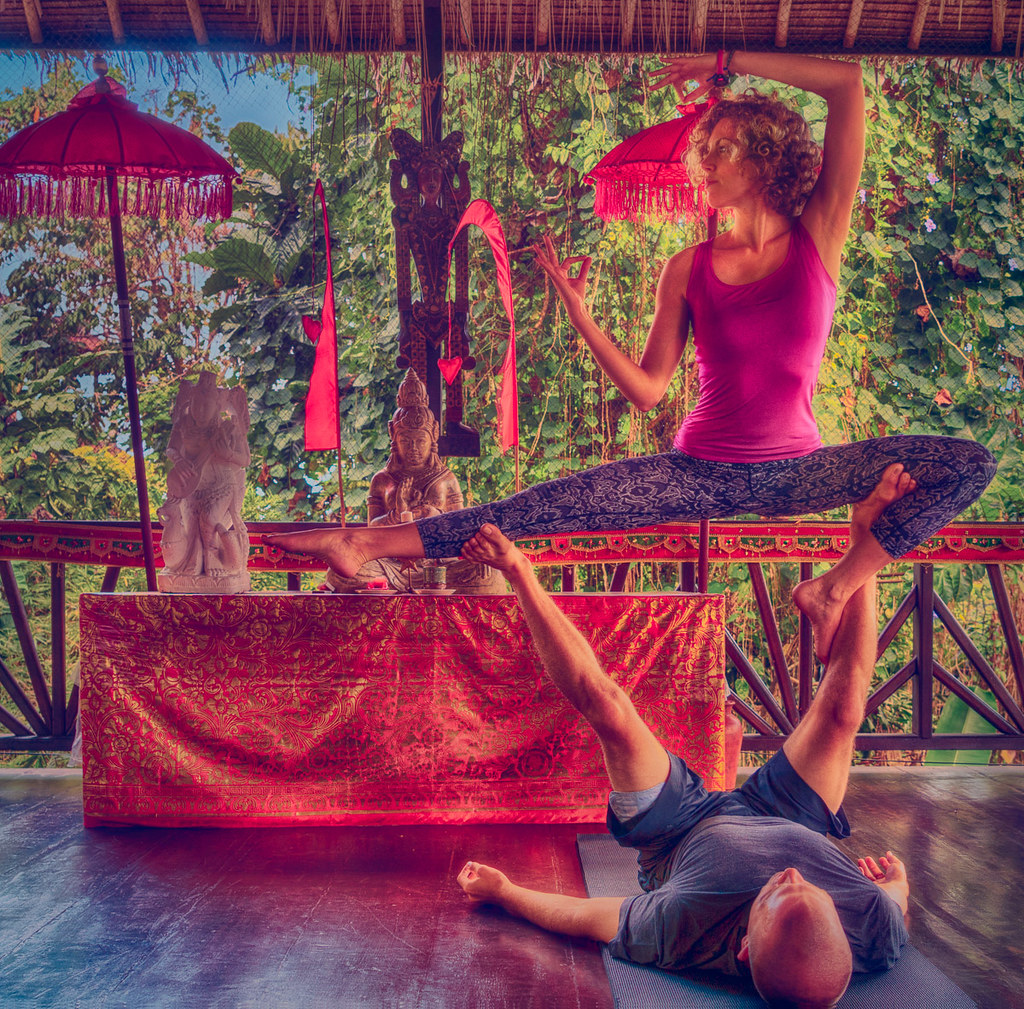 Involving myself with the Seattle community in 2009 brought an abundance of wonderful practitioners into my weekly orbit; many of whom had already been practicing for numerous years. A beautiful consequence of the rich collection of blended skill levels is that everyone in the community is always both a student and a teacher. This may sound somewhat counter-intuitive, but as a newbie joins, each new practitioner they work with teaches them more and more about their own body awareness, their own communication, and the edges of their personal ability. Correspondingly, the more adroit practitioners with which they work continue to learn new ways to communicate and adapt to better align with the newbie’s energies. This collaborative, co-creative, and co-evolutionary learning environment is quite divergent from typical student-teacher dynamics, a more constructivist environment, which becomes incredibly empowering to those that thrive on the win-win.

Upon our big Seattle departure, Dina and I focused a good deal of on-going planning effort towards plugging in to pockets of the global acro community. As a rewarding upshot, we’ve met all sorts of colorful characters and have come away with new friends that we’re eager to meet again someday over the rainbow. 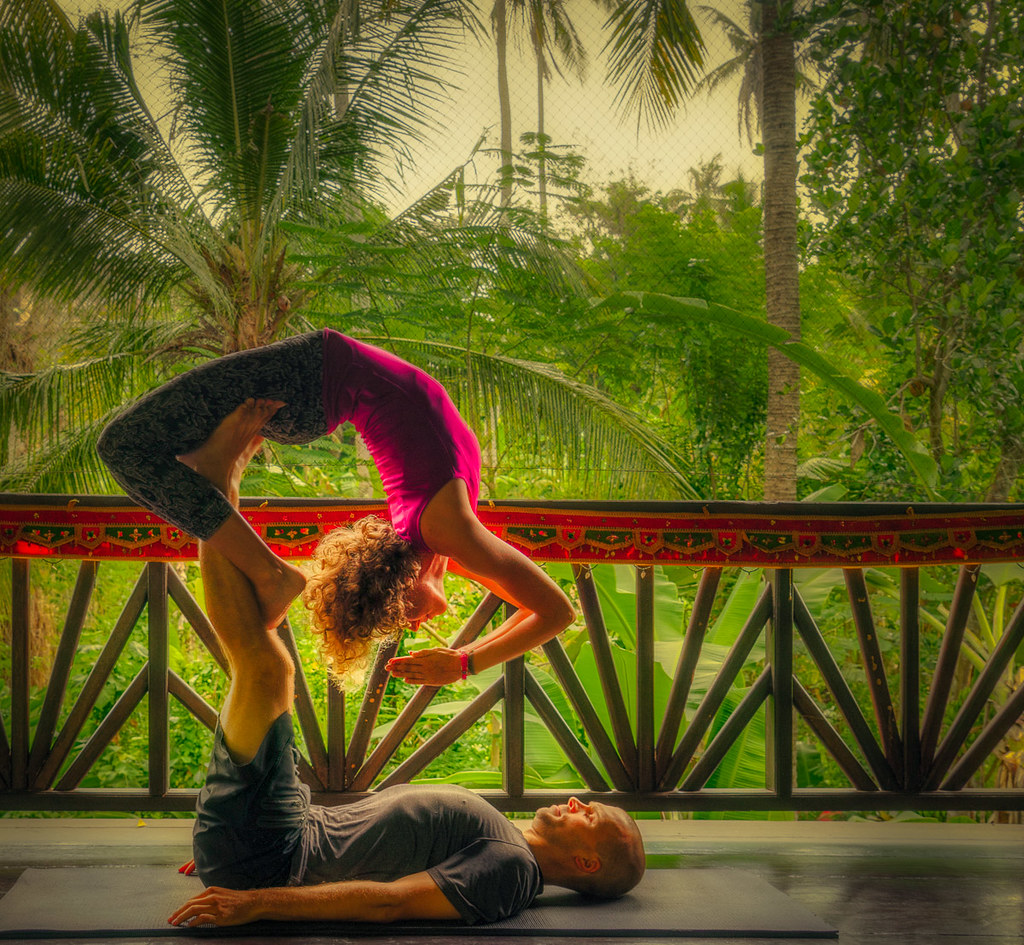 To deepen a personal acro practice, it is essential to innately feel where you have support through your connections with your partner and to collaboratively exploit those connections as you flow from one position to another. These connections, although not limited merely to the physical realm, depend greatly upon bone stacking and by meticulous “push don’t pull” adjustments with an astute mixture of pliable rigidity employed throughout the bodies.

Flowing from one position to another carries dual meanings for Dina and I as we continue along the path of travel we’ve chosen for ourselves. The essentials above, if viewed as a metaphor for life, can become a wonderful lens to help refine our own grace as we transition along our journey. Besides the obvious positive element of physical movement that accompanies an ongoing acro practice, when finding a bit of grass, a stone precipice, or a shaggy rug along our journey we immediately transport into a shared place of stability and calm. 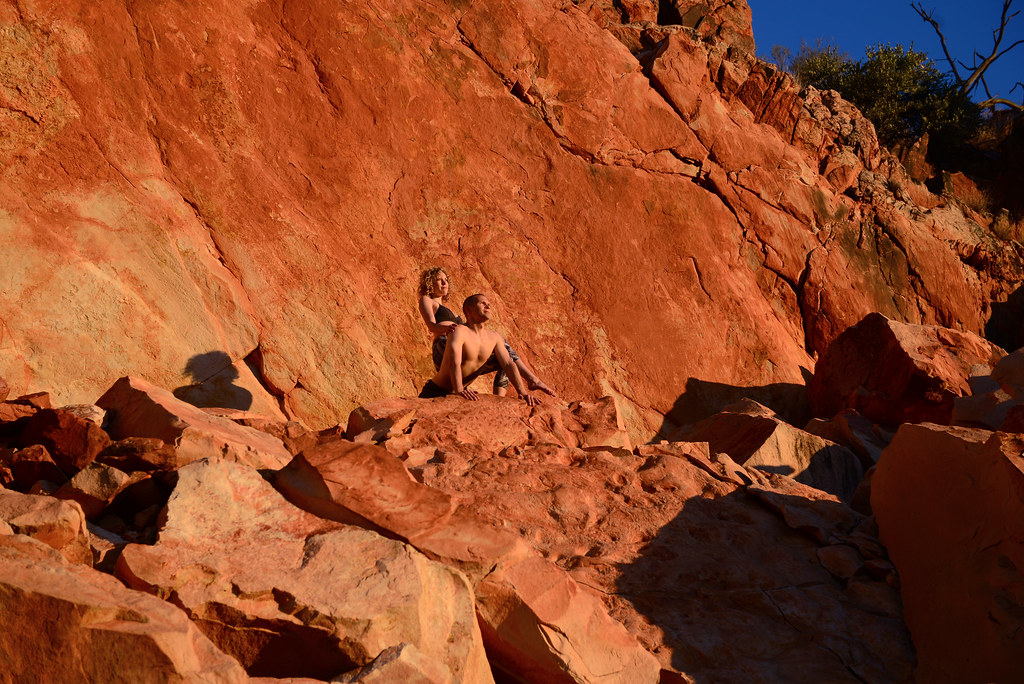 Living a placeless existence has its abundance of charms and its remarkable tolls. With a lively infusion of playful acrobatics in our lives, we’ve continued to stay well connected, introduced countless folks to the practice, and unlocked numerous adventures that we would never have had along the way otherwise. Additionally, we’ve found that when connecting with most other practitioners, we share an immediate human bond transcending the practice itself that expands our optionality by significant orders of magnitude.

By keeping acro as a priority in our lives, we’ve found ourselves working with a great number of newbie practitioners working through their own challenges within their practice. Working with these individuals and sharing meaningful suggestions with them has given us a wealth of insight into our own journey and helped us refine our own approach to teaching.

If you see us at the park, please come over and say "hi, I’d like to fly!" 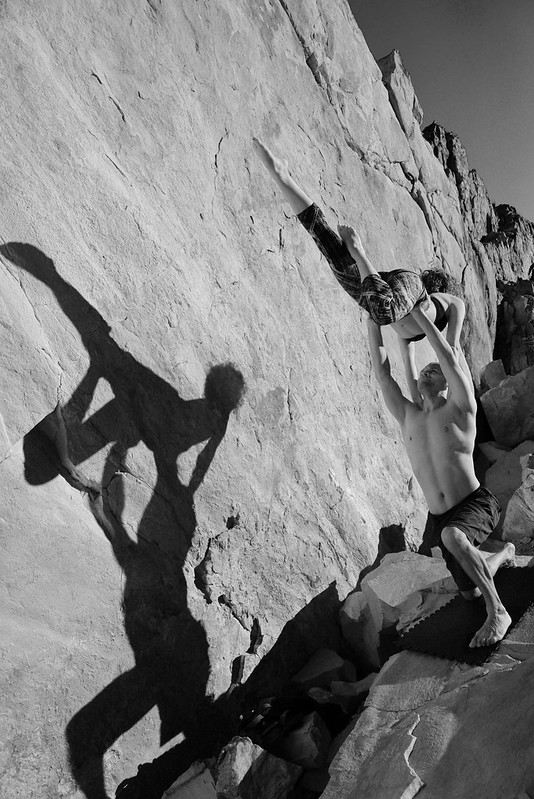 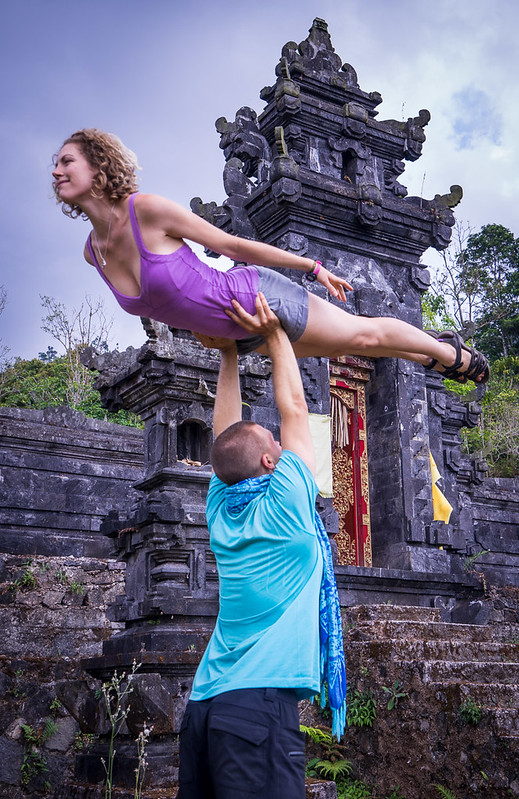 Essence of the practice

Fear peddlers of modernity have a seemingly infinite supply of wares to hawk across inexpensive advertising channels towards a target market with insatiable appetites for whatever seems to be in vogue at the present micro-moment. Too obvious to state, or perhaps far too cryptic for a closing section’s intro? Well both of course…

My point in highlighting modernity’s fetishization of fear is not to focus so much on the differences between now and antiquity, but rather to emphasize the sameness. Fear peddlers are no better nor worse than they were back in the age of the great philosophers and the human narrative has unfolded because of and in spite of all of these fears. We can’t, with any sincerity, stand stoically by and claim to be above the societal influences of our upbringings. We’ve been steeped in the language of fear since childhood and, be that as it may, rise to face each new day by choosing to stay engaged with the game of life. This courage in the face of intractable fear-based momentum unites us as individuals, divides us as collectives, and ultimately aligns free-flowing birds of a feather to gracefully soar together.

Regardless of locale, when playing with experienced acro practitioners, the spark of life is ever-present. Curious defenses and socially crafted egos surface here and there, however the fully-present practitioner quickly glides into flow leaving these jagged hang-ups behind.

When introducing acro to the uninitiated, a wonderfully predictable set of waypoints are reached, typically in fairly rapid succession. Those that say, "okay, sure, that looks like it might be fun" have self-selected as the curious and easily shun whatever initial hesitations or anxieties they might have towards the notion. The initial trust and surrender in becoming an integral part of a greater whole is quickly realized upon literally sweeping them off their feet. Very soon after, the playful giggles begin to emerge. As experienced practitioners, we receive a visceral wave of satisfaction and joy in passing this torch to our new partners … in giving them permission to grasp this spark of life.

Defensiveness, denial, ego, and all fear-based variants thereof attempt to restrain us from reaching the full potential in each day. Heraclitus is credited for stating, "no man ever steps in the same river twice, for it's not the same river and he's not the same man" which, as translated into a more modern-day acro-vernacular, means, the first fifty tries don’t count so go forth, be brave, and craft your own epic adventure!

Swimming with the fishes in Cairns, Queensland 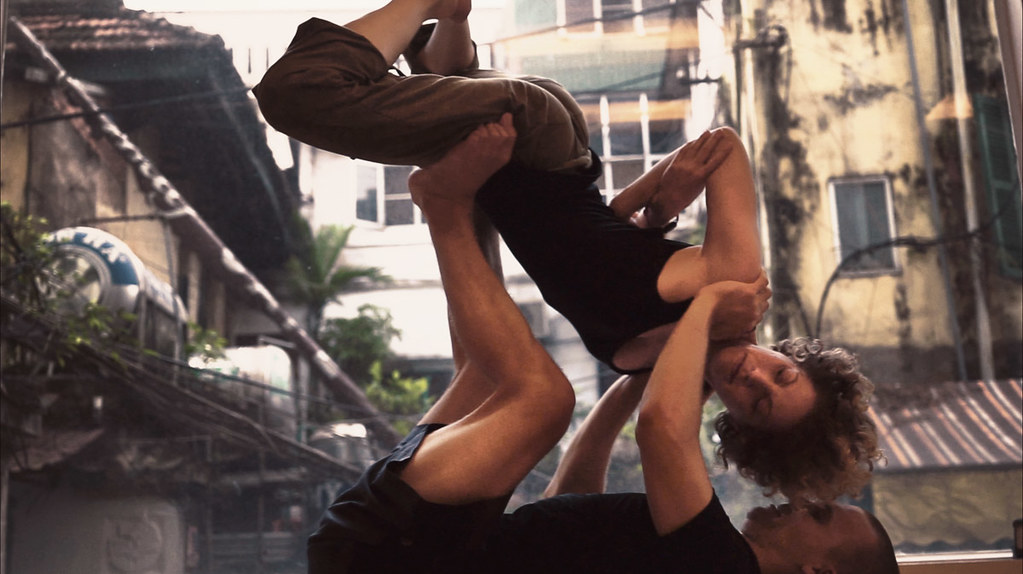 Gliding on the winds in White Sands, New Mexico

Burning Man, Seattle, New Orleans, Washington DC, Vietnam, Indonesia, Singapore, Australia, et al. -- Regardless of geography or the prevailing winds of whatever social changes might appear to be of utmost import, the acro practitioners that come together to fly are all tapping a deep and unseen well of playful exuberance for life. Sharing space, however brief it may be, with these playful souls around the world never ceases to enliven us and to elevate our sense of peace with whatever tomorrow might bring. Thank you all for continuing to let go of the fear and fly. Fly on pretty flyers ... fly on! 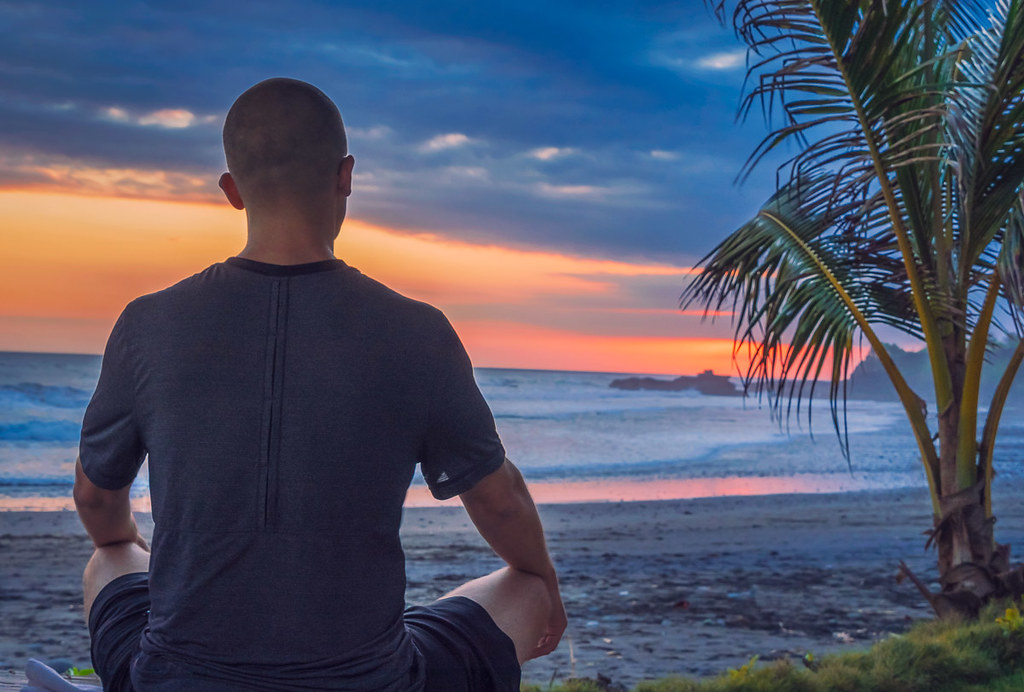